Background and why I built the RRISC CPU

In the early nineties, when I finally figured out how to do sequential digital circuits, I used the momentum of that heureka-moment to develop the RRISC CPU (Radically Reduced Instruction Set Computer), with the intention to build it using just 74xx TTL logic circuits. It was meant both as an educational and also instructive endeavor, as I figured such a simple CPU would be ideal for teaching the basics of CPU design. Being able to make an actual CPU from just two easy-to-build printed circuit boards would also free the whole topic from being a merely abstract one. If you put a bit of extra work in, you could actually see the CPU work.

After having drawn schematics, printed circuit boards, (and done it all again in P-CAD later), timing diagrams, and implementing an assembler and simulator in Turbo Pascal, I got to play around with the CPU only in the self-written simulator, displaying all CPU states and fancy 7-segment displays in DOS.

Despite all my intentions, I never got around to actually build it. Part of what was stopping me was that I had no EPROM programmer for writing programs into an EPROM that I would then insert into the CPU board to give the CPU something to execute. Eventhough I designed a cool battery powered SRAM module with PC printer interface (there was no USB back then, on my 80386 PC!), which would eliminate the need for EPROMs, I never got to build that either. Instead I focused on replacing the EPROM containing the CPU microcode by a GAL, my first step towards using programmable logic.

This is what an EPROM programmer looked like in the nineties 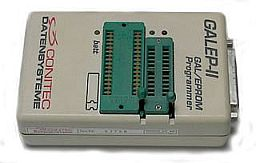 On top of that, to erase an EPROM, you would need an UV light source and point it at the glass window of the IC: 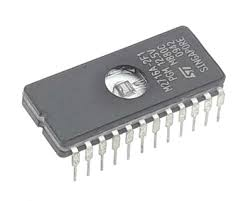 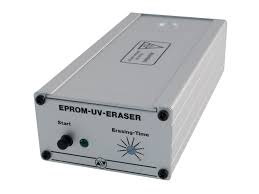 This lead me down the path of minimizing combinatorial digital logic circuits (Quine McCluskey anyone?), creating CAD files for automating production of minimized circuits, … Which all developed a life of its own, until I was past mere CPU design - I knew it worked, which was almost as good as seeing it work. And I moved on.

30 years ago I went to school and had no money. I thought then, one day when I earn money, I’ll get myself all the parts and programmers I need and build my CPU then. Which I almost forgot. Until now.

So, this Christmas, I thought I would revive the 30 years old project, but this time implement the CPU in VHDL so I can program an FPGA with it in order to get my CPU up and running in the physical world.

> Radical RISC from the early nineties